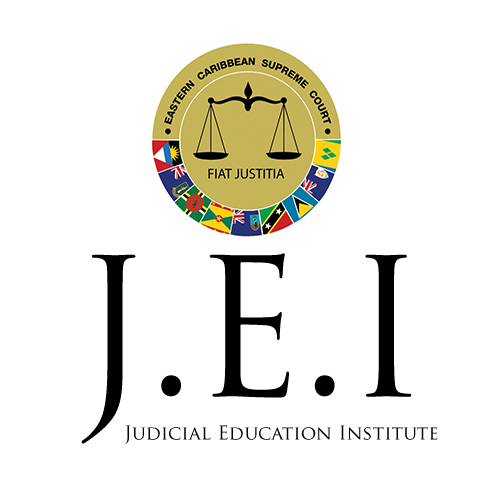 At the inception of the JEI, a small ad hoc committee managed the Institute and the Office of the Chief Registrar lent administrative support to its work. Justice of Appeal Albert Matthew was appointed Director of Studies, and the Institute, during this period, organized a series of programmes, targeting judges, lawyers and trial court registrars, with a view to refining and gaining a common understanding of the draft Civil Procedure Rules 2000. This committee, with an addition of other Judges, was established to produce a Code of Ethics for Judges.

As the pace and scope of the reform programme picked up, more and more onerous demands were placed on the JEI. It became obvious that the work of the Institute could not be properly accomplished with an ad hoc management committee. The JEI needed to be placed on a more formal and established institutional footing. Office space was required and there was need for dedicated and permanent staff.

This stage of the JEI was characterized by institutional strengthening simultaneously with a profusion of educational and training activities. During this period, the Institute was provided with office space and staff dedicated to the functioning of the Institution.

Justice Adrian Saunders was appointed Chairman of the body, and a full time Programme Coordinator, Ms. Alana Simmons, was employed in 2001. The Programme Coordinator reported to an executive committee initially comprising the Hon. Chief Justice Sir Dennis Byron; Justice Adrian Saunders; Mrs. Ianthea Leigertwood-Octave, Chief Registrar; Ms. Floreta Nicholas, Senior Magistrate; and Ms. Angus Smith, Human Resources Officer of the ECSC. The Programme Coordinator’s responsibilities covered the execution and implementation of the Institute’s programmes, the preparation of programme budgets and the maintenance of the records and documents of the JEI.

Two years later, the office of Programme Director of the Institute was created, further strengthening the JEI. This post remains vacant after being filled for a little over a year.

An Advisory Board, comprised of distinguished and experienced personnel drawn from academia, the Bar, the Executive and the retired Judiciary, was also established during this period. The intention was that this body would assist in the policy-making of the JEI, and advise on strategies that could be pursued in carrying out the work of the Institute.

The JEI made tremendous strides during this period. The body began consciously and systematically to regard itself as a critical player in the reform process. Particular attention was paid to gearing the judicial officers for their role in a reformed justice system.

The Institute also took upon itself the task of ensuring that every new judicial appointee was given a full orientation before embarking on his/her duties. This entailed the organizing of orientation and mentoring programmes for new Judges, Masters and Magistrates.

The Institute continued to organize special programmes for judicial officers to enhance their competency levels in emerging areas of the law. The World Intellectual Property Organization (WIPO) sponsored a symposium on Intellectual property for the judiciary in June 2001 in Saint Lucia. In December 2001, the Caribbean Anti-Money Laundering Programme (CALP) conducted a seminar in Grenada, and in March 2002, there was a Telecommunications Workshop in Saint Lucia. During each of these events international experts shared their knowledge and experience with the local judiciary.

The JEI is keenly aware that critical to the success of the reform programme is the enhancement of the skills of the court staff. In particular, it has been necessary to build up a cadre of trial court administrators for each of the trial courts in the jurisdiction.

Court administration is a novel concept in the judiciary’s lexicon. Fundamentally, what it imports is that those functions that are essential to the running of the courts, but which are non-adjudicative (and which therefore need not be handled by judicial officers) should be placed under the superintendence of a non judicial officer called a court administrator. Such functions would include, for example, the management of the court’s human resources, library facilities, plant and equipment, etc.

Placing these management responsibilities under the supervision of an efficient court administrator frees up the judicial officers to do what they do best, i.e. trying cases and adjudicating disputes.

In October 2002 therefore, in collaboration with the National Center for State Courts in the USA, the Institute organized an extensive training programme in court administration. The programme which lasted for ten days was convened in Saint Lucia, and was attended by Registrars, prospective Court Administrators and other senior Court office personnel.

During the period 2001-2003, the JEI moved towards becoming a body that certified its trainees as conforming to particular standards. This was another manifestation of the growth of the Institute.

In October 2002, Mrs. Deborah Mendez-Bowen, Mediation Consultant, trained a core of mediators in Saint Lucia, and all but three of them were certified by the JEI as Approved Mediators. These persons have successfully mediated disputes in the court-connected Mediation Pilot Project in Saint Lucia.

The period under review also witnessed a growing relationship between the Institute and the Judicial Studies Center of the Americas (JSCA) based in Chile. The JSCA is dedicated to promoting excellence in the justice systems of Latin and Central America. This resulted in the sponsoring of a workshop on the value and utility of statistics as a tool for managing justice systems, held in Saint Lucia in April 2003, for Judges, Registrars and Court Administrators.

Apart from the CJEI and the JSCA, the Judicial Education Institute also established working relationships with the Commonwealth Secretariat, the Commonwealth Magistrates and Judges’ Association (CMJA) and the Caribbean Law Institute (CLI).

In 2004, the Chairmanship of JEI changed. Justice Adrian Saunders the outgoing chairman was elevated to act as the Chief Justice of the court, making room for Justice Hugh A. Rawlins who led the JEI from April 2004, to August 2, 2007.

Under the new chairmanship, the JEI continued its mandate and conducted training, to enhance the quality of service provided to its stakeholders. Apart from its usual Orientation Programmes for Newly Appointed Judicial Officers, in April of 2004 the JEI conducted a programme on Court filing Fees, to equip the users of the software with the necessary skills.

The vehicle behind this Judicial Exchange was the United States Embassy in Barbados. In May of 2003 the first Judicial Exchange between the US and the Caribbean was held between the Judiciary of Barbados and the Department of Justice in the United States. This exchange proved to be a success and the Embassy wanted this to be repeated with the Eastern Caribbean Supreme Court.

The main purpose of the exchange was to share ideas and to enable the two judiciaries to learn from each other. Judge Arterton’s main areas of interest were: Judicial Education, the Caribbean Court of Justice, Court Administration, Mediation, Case Management and Judicial Governance.

In 2005 the Acting Chief Justice, Hon. Brian Alleyne, SC, reinstituted the Annual Judicial Conference for OECS Judges and Registrars on the advice of Justice Sidney Lederman of Canada, a member of the Commonwealth Judicial Education Institute in Halifax, Nova Scotia Canada. His visit in March 2005, focused mainly on assisting the JEI in its restructuring process, assessing the shortcomings of the Institute and providing recommendations for its improvement.

He recognized the lack of human resources to effectively carry out the Institute’s mandate. He felt that a Programme Director and Administrative Officer to add to the present Programme Officer would only serve to enhance the operations of the institute.

In September 2005 the JEI instituted the Biennial Conference for OECS Magistrates, which was held in the British Virgin Islands.

In 2006 the JEI developed a model programme in Customer Service Awareness for Judicial support staff of the Magistrates Courts and High Courts of the OECS. This training was completed in December 2011, having been delivered to all the Member States and Territories of the OECS. In 2006 the JEI delivered Orientation programmes, conducted training in Audio Recording and on Judicial Enforcement Management Systems.

In August 2007 Justice Ianthea Leigertwood-Octave was appointed as the chairperson of the Judicial Education Institute.  During the September 2007 to December 2008, the JEI conducted training workshops for Crown and Police Prosecutors, Juvenile Justice Seminar for Judges, Magistrates, Police Officers and Child protection Officers.  Training in International Commercial Litigation was one of the major programmes conducted by JEI in March 2008. Also conducted were Bailiff workshops, orientation programmes for newly appointed Judicial Officers, Customer Service Seminars,  a JEMS workshop, and JEI’s first ever collaboration with the OECS Bar Association, a Symposium on the CPR 2000.

During his tenure as the Chief Justice Sir Hugh guided the work of the Institute through two chairpersons, namely Justice Ianthea Leigertwood-Octave and the current chairperson Justice Louise Blenman.   Sir Hugh’s background in education stood him in good stead during his tenure as Head of the Institute.  Under his leadership, Her Ladyship the Hon. Justice Louise Blenman the Chair of the Judicial Education Institute continued to actively facilitate programmes geared to satisfy the training needs of the Court’s judicial officers, as evidenced by the following activities.

The Bench Bar Symposium has been an annual event, since its inception in September 2008.  In 2009 the theme was Sentencing in Capital Cases.

JEI’s Annual Judicial Conference is the Institute’s signature event, where judges from both the High Court and the Appellate Division meet for exchange of information and to keep abreast of developments within the law. In 2009 the Conference focused on Proceeds of Crime and Anti-money Laundering.

In 2010 the Eastern Caribbean Supreme Court (ECSC) and by extension the JEI underwent some budgetary constraints and as a result postponed the Annual Judicial Conference.  However the event was resumed in 2011 under the theme of Judicial Ethics and Independence and in 2012 the sessions focused on Environmental Law.

In 2010, 2011 and 2012 the themes for the Bench Bar Symposium were Expert Evidence, Recent Amendments to the CPR 2000 and Practice Directions and Professional Ethics respectively.  Both the bench and members of the constituent bars of the OECS have welcomed this exchange.

The JEI continued offering its series in Customer Service training to Member States of the OECS.  In March 2011 relevant personnel in the Commonwealth of Dominica High Court and Magistrates Court were exposed to the underlying principles of customer service; and in December of that same year the Territory of the Virgin Islands Courts benefited from the same training.

Other training programmes for 2011 included Orientation Programme for Bailiffs of Saint Lucia, St. Vincent and the Grenadines and Antigua and Barbuda; Protocol Workshop for Registrars of the nine Member States/Territories and Staff of the Court’s Headquarters in Saint Lucia; Colloquium on Gender and the Law for Judges of the ECSC; and Orientation for newly appointed Judges.

Training programmes commissioned by JEI in 2012 included: Proceeds of Crime Workshop for Crown and Police Prosecutors from the Independent OECS Territories and Barbados; Magistrates Conference focusing on Gender and the Law and training on Judicial Enforcement Management Systems software for Magistrates in St. Kitts.

The females continue to excell and make sterling contributions in the OECS judiciary, as evidenced by the fact that both the Eastern Caribbean Supreme Court and the JEI are headed by women.  The Institute takes this opportunity to congratulate Her Ladyship Hon. Chief Justice Janice Pereira for being the first female Chief Justice of the Court.  Her Ladyship seeks to build upon the work of her successors in accordance with the rule of law.  She proposes to conduct training for Judges and other judicial officers in multidisciplinary areas.

Her Ladyship is committed to improving training for Judges, Magistrates, Registrars and Court Staff.  She is keen to see the JEI conduct training in Arbitration and Alternative Dispute Resolution.  She also believes in expanding mediation to family matters.  The staff of the JEI remains committed to its mandate and looks forward to the direction of her Ladyship.