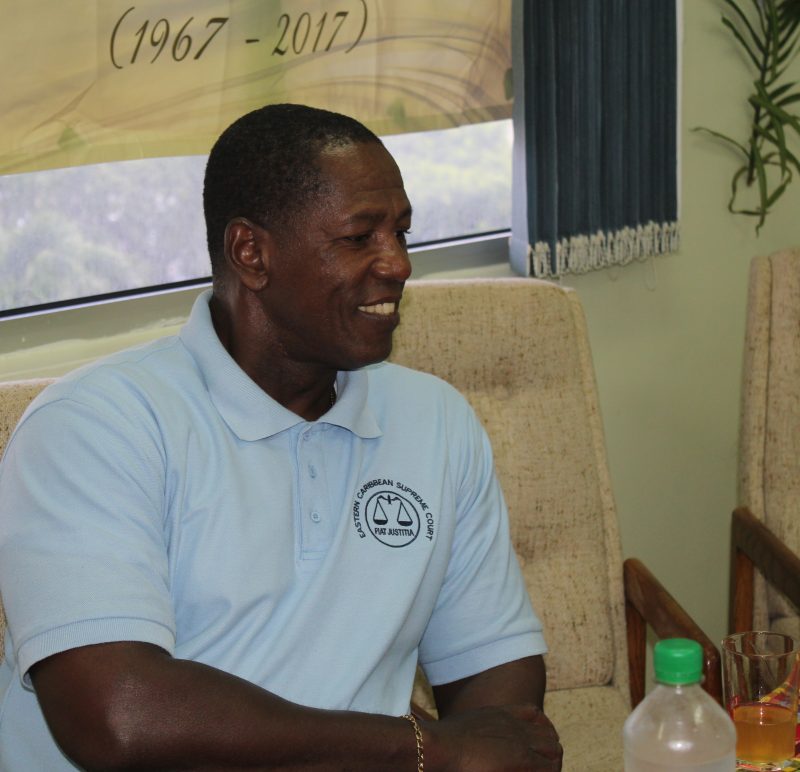 It was a Wednesday morning with very good weather and Guy turned up for work bright eyed and bushy tailed ready for duty. At that time Sir Lascelles Robotham was Chief Justice and the famous song Girl I’m Gonna Miss You by Milli Vanilli hit number 1 on the US top 100 chart. The history of Soufriere is inextricably linked to that of Saint Lucia and the same can be said of Guy and the ECSC. Of the 40 years of the Court being headquartered in Saint Lucia, Guy would have spent 30 of those years as an employee of the Court. It is undeniable that Guy is part of the fabric of the ECSC.

When Guy joined the ECSC, the Court of Appeal at that time comprised the Chief Justice, two Justices of Appeal, Secretary Ms. Deane, and himself as Office Messenger. Importantly, in his early years Guy was the means of communication between the Chief Justice in one building and Madame Registrar Indra Hariprashad, who held the dual role of High Court Registrar and Chief Registrar, in another building on all matters pertaining to the Court of Appeal and indeed, the High Court.

Over the past 30 years, Guy has seen the composition of the Court of Appeal grow from one Chief Justice and 2 Justices of Appeal, to a large organization comprising Chief Justice, 5 Justices of Appeal, and over 40 staff members serving in various departments divided between two office locations in Castries. Things have accordingly come full circle with Guy again moving between offices with documents to get the work done! Guy has seen the Court transition from the manual ways of producing work with one typewriter; to the various stages of technological development that now exist including e-filing. Guy has provided unwavering support for all the various activities and projects piloted in Saint Lucia, such as the computerization of the Court, Mediation, Court Reporting, the JEMS Programme, and the newly launched e-Litigation Portal.

Guy has the privilege of being the only current ECSC staff to have worked with seven of the twelve Chief Justices. This makes him our very own historian, ECSC lexicon and archivist. Like the majestic Pitons, which are a must-see for anyone who visits Saint Lucia the same can be said about Guy Stava on a visit to the ECSC Headquarters. If you are a new member of staff of the Court and would like to get authentic information on the history of the court then Stava is the Guy. He is able to connect the dots between the then and the now in such a way that is important to see and hear him as his facial expressions, his voice, his reflections and his body language change accordingly. This makes his ECSC down memory lane sessions so organic and it is something you would not benefit from if you were reading it from the ECSC website or in a book.

Guy has worked hard over the years. He is loyal, affable, trustworthy, diligent and unfailing in his duties. Even though he travels from his home town of Soufriere every day, one can hardly ever recall him being ill or absent. He takes his work seriously, always with a pleasant smile on his face. It was Steve Jobs who said “The only way to do great work is to love what you do.” This is a true reflection of Guy as not only does he love what he does but he is also truly dedicated to the ECSC and has the best interests of the Organization at heart. His impressive work ethic is an inspiration for everyone at the Court – he truly gives his best every day.

Guy and the ECSC are like a marriage where the elements of respect, trust, commitment and expectations are ever present. It is clear that after 30 years the ECSC and Guy continue to enjoy their symbiotic relationship. No matter how disappointed he is sometimes, he is always optimistic and believes that humble beginnings and difficult challenges are the foundation of every great accomplishment. Therefore, Guy is able to shine through at all times. Guy you are like a circle, the pursuit of your excellence has no end. We salute your unwavering commitment to outstanding personal performance to the Court through the years and on a daily basis.

Guy, the Hon. Chief Justice, Justices of Appeal, High Court Judges, Masters, the Magistracy, Management and Staff of the Eastern Caribbean Supreme Court both current and past offer our heartfelt congratulations on your 30th work anniversary! We appreciate your energy, your kindness, and all the work you do, but most of all, we just appreciate YOU!