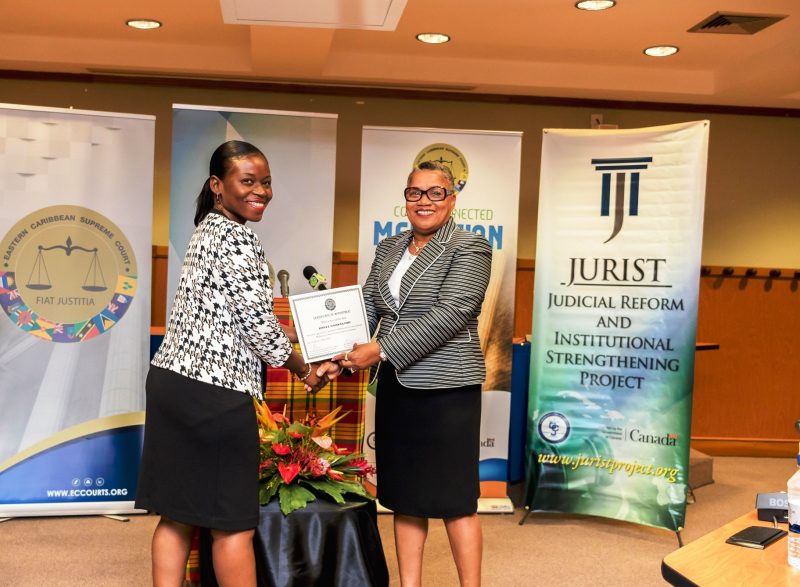 The Eastern Caribbean Supreme Court (ECSC), with support from the Canadian funded Judicial Reform and Institutional Strengthening (JURIST) Project, launched a Mediation Public Awareness Campaign in St. Vincent and the Grenadines on Thursday 9th May 2019 at 10:00 am in the National Insurance Services Conference Room, Kingstown. The launch was held to communicate the contents of the year-long public awareness campaign with members of the public and the media.

The event gave the Honourable Chief Justice an opportunity to personally thank the Executive Director of the JURIST project for its continued support to the ECSC Court-Connected Mediation Programme and assured members of the legal fraternity present that mediation does not take the place of legal advice from a lawyer but that it may aid parties to identify the core issues in dispute and find mutually agreeable solutions which will allow for flexible solutions and settlement in a timely manner.

Her Ladyship also underscored other benefits of mediation to members of the audience attending the launch. Key among them was the fact that mediation is inexpensive relative to the cost of seeing a case through trial which is often an expensive and timely proposition. Moreover, mediation is a process by which parties in conflict are given an opportunity to resolve the issues amongst themselves outside of the formal court system and as a result settlements reached are more agreeable to both parties than court judgments.  Also stressed was the confidentiality of the mediation process.

Some of the year-long activities that were shared by the Honourable Chief Justice included town hall meetings, panel discussions on the National Television Network, a College Open Day  to promote Mediation, among other activities.

The key message of the public awareness campaign is to give focus to the benefits of court-connected mediation under the legislative framework of St. Vincent and the Grenadines. Mediation through the High Court of St. Vincent and the Grenadines will  hopefully be the first step towards resolving disputes that arise during commercial transactions, in the community or in the workplace.

Immediately after the launch, there was a cocktail reception where the appreciative and lively gathering took the opportunity to mingle and socialize with each other.

Please stay tuned to our website and the media for further updates about the Court-Connected Mediation public awareness campaign.