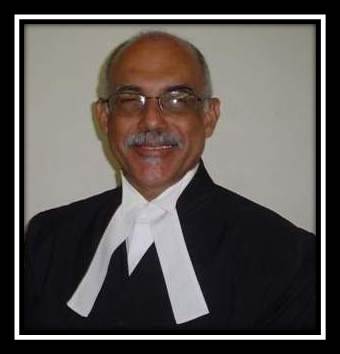 The Honourable Brian Alleyne entered politics and served 16 years in the Commonwealth of Dominica Parliament. There he gained a reputation as a thorough legal mind and an astute diplomat. He was variously Senator, Attorney General and Minister of Legal Affairs, Minister of Home Affairs, and Minister of External Affairs. He also served as the renowned Queens Council, Attorney General of the Windward Islands, and acting Judge of the Windward and Leeward Islands High Court.

For his outstanding diplomacy, the Republic of China in 1990 awarded him the Order of the Brilliant Star. His elevation to Senior Counsel (SC) of the Commonwealth of Dominica Bar followed in 1991.
Apart from serving as chairman or member of the Board of several companies, Justice Alleyne also gave substantial service to the various local and regional organizations of the legal profession. Among other positions, he was Vice President and Secretary of the Dominica Bar Association, Director and Vice President of the Organization of Commonwealth Caribbean Bar Associations, and Director of the Caribbean Human Rights and Legal Aid Company.

On July 1, 1996 Justice Brian Alleyne was appointed High Court Judge of the Eastern Caribbean Supreme Court. He was later elevated to Justice of Appeal, Sep 1, 2003, and subsequently Acting Chief Justice on March 1, 2005, a position which he held until his retirement on April 28, 2008.

Throughout his career, Justice Alleyne has consistently shown outstanding political and legal leadership, integrity, selflessness and a generous spirit. Fittingly, in July 2007, for his distinguished service to the OECS region and to the Law, Justice Alleyne was knighted.