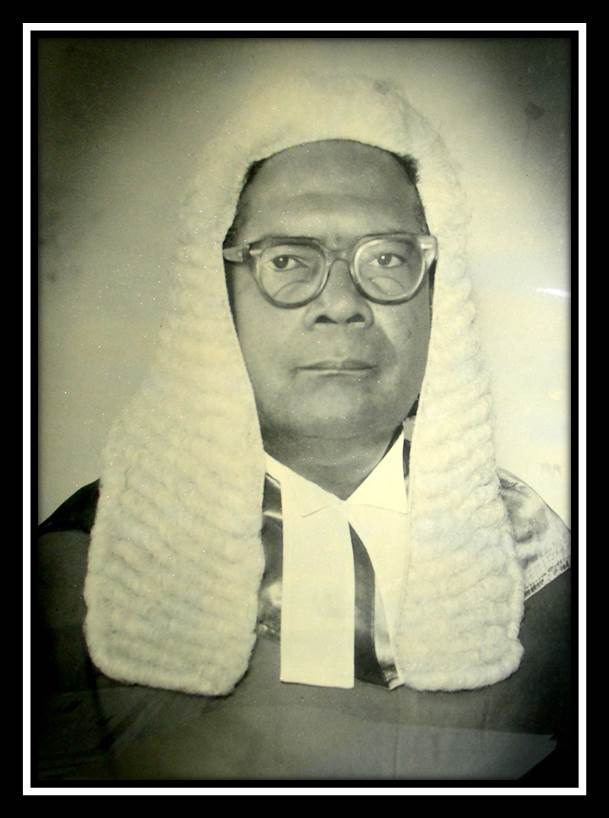 Sir Allen Montgomery Lewis was born in Castries, Saint Lucia on October 26th 1909. He was educated at the Castries Anglican Infant and Primary Schools and Saint Mary’s College.

After his success in the London Matriculation Examination in 1926, he entered the legal Chambers of Mr. Elwin Augustin, Barrister at Law as an articled clerk. In due course, he passed the local bar examination, was called to the bar of the Royal Court of Saint Lucia in June, 1931 and began practice as a barrister, solicitor and notary – royal in Saint Lucia.

Sir Allen continued his private studies and in 1940 sat and passed the Bachelor of Laws degree examination of London University with second class honours.
As a “local” barrister, Sir Allen was entitled to practice his profession only in Saint Lucia. He wished, however to practice in other parts of the British West Indies also. He therefore joined the Middle Temple, one of the Inns of Courts of England, where English barristers are trained. Due to the Second World War, travel to England was difficult, so candidates were permitted to study for and sit their law examinations outside of England. This Sir Allen did and after the war he proceeded to England, read in the Chambers of an English barrister and in May 1946 was called to the English bar. He returned to Saint Lucia and continued to practice there until 1959.

Sir Allen served as Acting Magistrate in 1940. In December 1941, he was elected a member of the Castries City Council. He continued as a member until 1956, being elected Chairman six times. In 1943 he was elected a member of the Legislative Council of Saint Lucia and served until 1951. He was instrumental in the movement for adult suffrage, and was one of the founders of the Saint Lucia Labour Party (1950).

On the formation of the West Indies Federation in 1958, Sir Allen was called to service in a regional field. Appointed to represent Saint Lucia in the West Indies Senate his colleagues elected him to be the first president of the Senate. He held this post until 1959 when he was appointed a Judge of the Federal Supreme Court of the West Indies.

Upon the dissolution of the Federation in 1962, Sir Allen was appointed a Judge of the Court of Appeal of the newly independent Jamaica. He served in this post until 1967 when he returned to the Eastern Caribbean to assume the post of Chief Justice of the newly established West Indies Associated States Supreme Court.

In 1972 Sir Allen retired from the post of Chief Justice and brought his judicial career to a close. He returned to his native Saint Lucia and set up a National Development Corporation whose functions were to develop the economy of Saint Lucia. After two years of work in which he finally laid the foundations of the organisation, he was appointed Governor of Saint Lucia – the Queen’s representative and Head of State.

On the attainment of Independence in 1979, Sir Allen became the first Governor – General of Saint Lucia. He retired in 1980 and was re-appointed Governor – General in 1982, where he served until 1987. However, he still served the region as Chancellor of the University of the West Indies, a post he held from 1975.